So, I made a lemon cake with lemon curd filling for Easter, but since I took too long to write about it, I'm just calling it a springtime cake.  And I've got something fun to do with all the eggshells being used.  If you're from San Antonio, you know what that fun thing is, but if not, you might be in for a great way to surprise your friends. 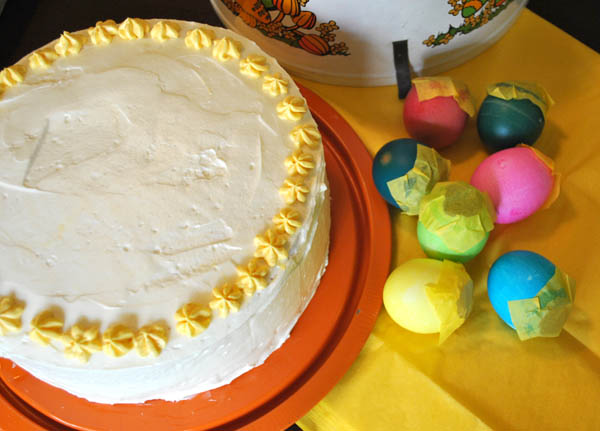 I got a lot of compliments on this cake about how 'perfect' it was.  It wasn't perfect, but it is one of the most technically excellent cakes I've ever made.  Wanna know why?  I followed all of the instructions to the letter.  I used cake flour, I sifted, I measured carefully and, I guess, I'm getting a bit better at baking.  I mean I've been baking since I was about 9, so I hope I'm getting better at it.

Now, onto the cake.  I'm so excited that I got to steal some lemons from my friend's tree for this cake.  There is lemon extract and zest in the cake, homemade lemon curd for the filling and I mixed a bit of lemon curd into the buttercream to make a lemon icing.  The curd was the part with real zing, I decided to keep the cake and icing subtle so that it wouldn't be overwhelmingly lemony.  I didn't want any one to look like the lemon babies. 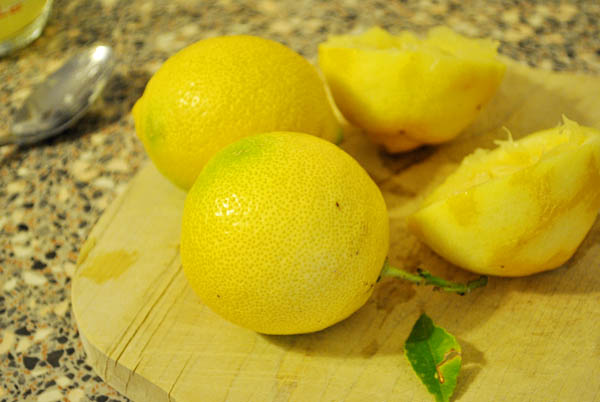 Bake the cakes according to the recipe below, be sure and line your pans with parchment, it's the only surefire way to nicely remove a cake from a pan.

Make your curd according to the recipe below while the cakes cool.  You have to watch the curd carefully, mine stayed the same consistency for a while and then turned into a thick lovely curd in an instant.  Let it cool.

Make a standard buttercream frosting and add a few spoonfuls of curd to the icing.  You only need enough curd to make 2 layers of filling.

I stated off by leveling the cakes a bit, there was a little dome on top and I just used my bread knife to remove most of it.  To fill the cakes, I piped a rim of icing as a 'curd barrier' so that it wouldn't seep out.  Then I filled each layer with the remaining curd. 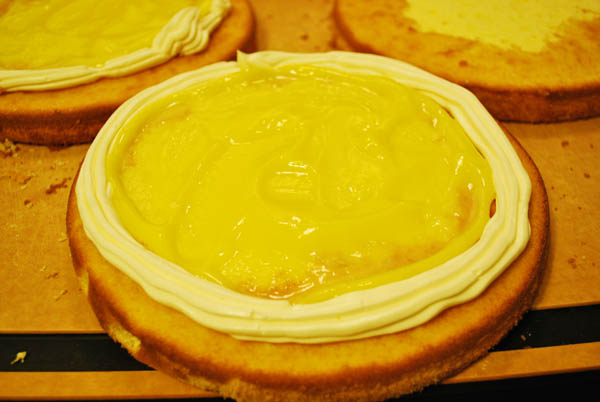 After they were filled, I stacked them up and did my crumb coat.  Pop the cake in the freezer for a few minutes and then get on to the final coat of icing. 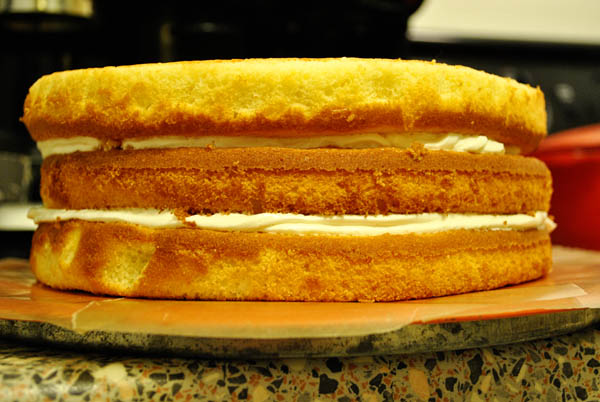 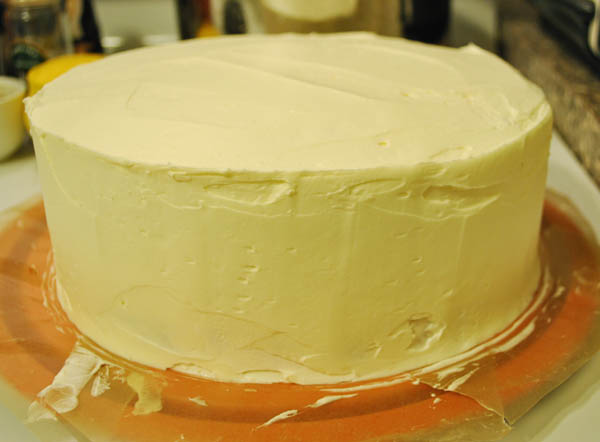 I added a little yellow food coloring to my remaining icing and used a star tip to pipe a border.  Done and Done. 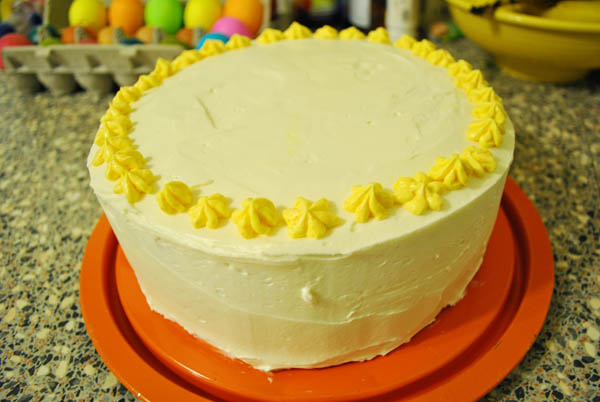 Now, what to do with the eggshells?  From this cake and curd you will end up with 7 eggshells and if you make a quiche you'll get up to a dozen eggshells.  You might even save your eggshells for a few weeks to get yourself a few dozen.  The important thing is to crack these eggs correctly.  Strike the top of the egg against your counter and then head over to the sink and remove a half inch sized circle of shell with your hands.  Dump out the insides and rinse out your shells.

After you've acquired all of those shells it's time to dye them.  Dye them like you would any Easter eggs and then let them dry out overnight.  I popped mine in a low oven for a few minutes to really get them dry. 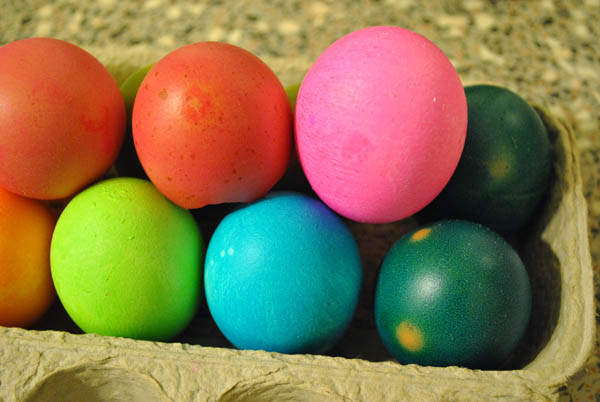 Then you fill them with confetti and top them with tissue paper.  Plain old Elmer's works, but I couldn't find any so I used my hot glue gun. 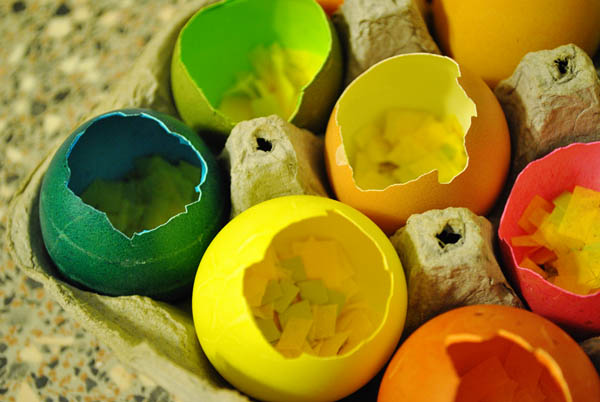 These are called cascarones.  I grew up in San Antonio where these things are ubiquitous for Fiesta and Easter.  Every year our school tried to ban these to save the janitors' sanity, and every year we brought them anyway.

Now for a little lesson on cascarone etiquette.  Break the egg in your hand over someone's head and then smash the confetti into their hair.  It's important that you not actually smash the egg on someone's head because that kind of hurts.  It's best to to do this outside and use confetti that is made of paper, not shiny mylar or plastic.  Paper will disintegrate.  It's also polite to pick up the largest pieces of eggshell that are going to stay glued together with the tissue paper top.  Everything else will return to the soil fairly quickly.

Four-Egg Yellow Cake
adapted from The Joy of Cooking


Preheat oven to 350 degrees.  Grease, flour and line with parchment three 8 or 9 inch round cake pans.

Beat in one at a time
4 egg yolks


Fold 1/4 of egg mixture into remaining batter, then fold in remaining whites.

Divide batter between 3 pans and bake 25-35 minutes, until a toothpick inserted in center of cake comes out clean.  Set aside and let cool.

Heat lemon juice in small saucepan until hot, but not boiling.  Whisk eggs and yolk in separate bowl, gradually whisk in sugar.  Continue whisking eggs and slowly pour in hot lemon juice.  Then pour mixture back into saucepan and cook over medium heat, stirring constantly with a wooden spoon, until mixture is 170 degrees or is thick enough to cling to back of spoon.  (I really didn't need the thermometer, the curd just turned and it was pretty obvious that it had thickened).  Immediately remove pan from heat and stir in cold butter until incorporated, then stir in cream, vanilla and salt.  Finally, pour curd through a fine mesh strainer and cool.  Place in a bowl and cover with plastic wrap (let plastic wrap touch the top of the curd so that a skin doesn't form).

There were lots of notes in this recipe about using non-reactive bowls and pans.  I believe that glass, plastic, wood and stainless steel are all fine.  I think the main thing with acids is to avoid the aluminum.


Make a standard buttercream, I used 2 sticks of butter, some vanilla and enough powdered sugar to reach the right consistency.  Then add a few spoonfuls of your yummy lemon curd to taste.  Et Voila! Lemon icing.
Posted by leenie at 11:31 PM

god, i miss your dinner parties

I hope we are having one in a month!

Oh My! This looks divine. We're coming into Spring now so this cake might be the perfect way to celebrate its arrival!