After Riyadh we headed to Milan for iSaloni, a humongous furniture fair.  We bunked up at the Hotel Principe di Savoia.  Many of the rooms had recently been redone and I was a fan of the purple with a few bold accents color scheme that was chosen. 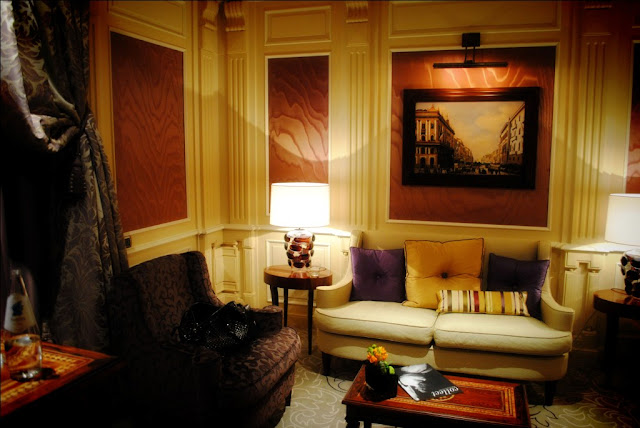 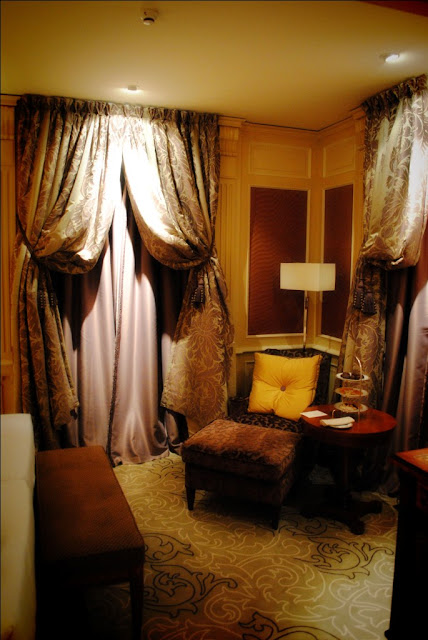 We spent most of our time at the furniture fair (I'll discuss in the next post), but we did get in a quick trip to il Duomo.  The last time I went to Milan (almost 6 years ago), the front was entirely covered by scaffolding and a scrim, so it was pretty awesome to see it in all it's restored glory. 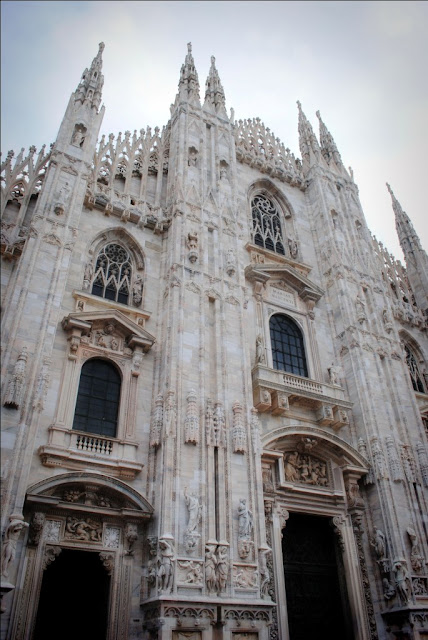 Then we headed up to the roof (by far the coolest part of the whole cathedral)  Check out this gem of a carving.  I have no idea what's going on here, but it is amusing. 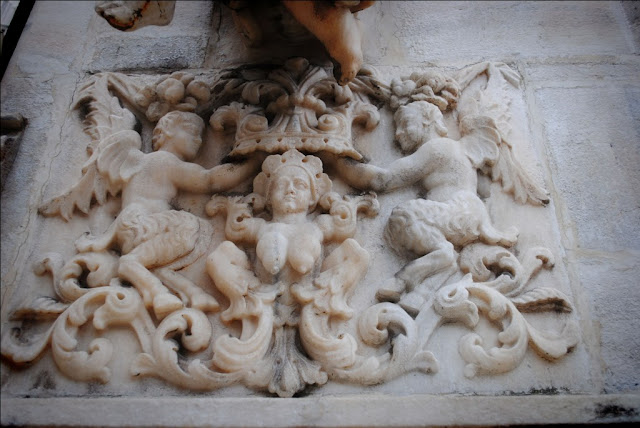 The intricacies, scale and amount of detail are staggering.  It's so amazing to think of how much manpower, energy and resources were put into these projects. 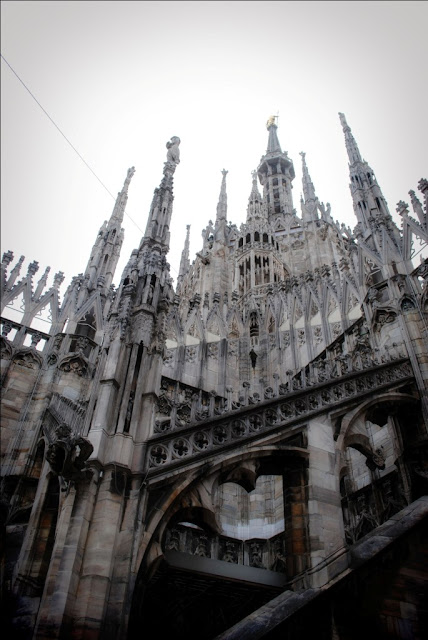 And here's a shot of the galleria, it's such a lovely space, but it's a shame that there isn't a single thing that I can afford in there. 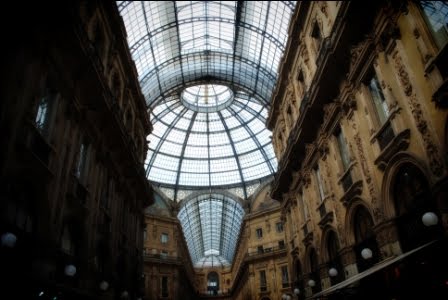 Here are some of the bikes just hanging around the city ready to take part in a bike share program.  You sign up, pay a few euro and you get to check out bikes all around the city.  Such a great idea, and I wish I'd had a chance to take advantage.  And check out the adorable baskets! 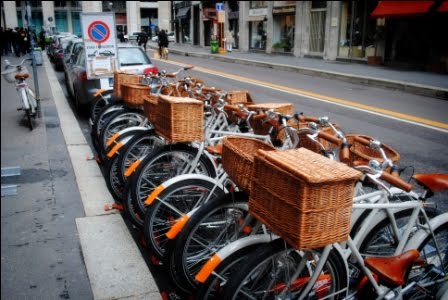 Up next will be some of my favorite booths from the furniture fair.  I think I was more impressed by the installations than the furniture.
Posted by leenie at 6:01 PM 1 comment: 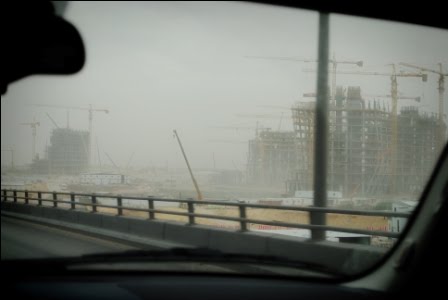 This was definitely an eye-opener.  I had a pretty sheltered existence while I was there, mainly being shuttled between my accommodations and our various meetings, I certainly wasn't able to venture out on my own (women can't drive).  I truly hate driving, so I'm OK with that (as long as I can afford someone to drive me where I want, when I want).  But I only had to wear the abaya (traditional robe and veil) out in public and rarely had to put on my veil and it really wasn't a huge deal. 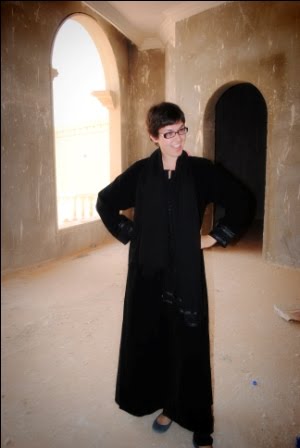 It's supposed to go to the tops of your shoes, but I got the longest size available and it was a couple of inches too short. Eh, I guess I'm tall for Saudi Arabia.
The men totally wear traditional clothes as well.  The long white dress shirt looking things with the printed scarves held to their heads by black cords.  I don't think they're required to wear this outfit like women are required to wear the abaya, but I'm glad that they keep tradition.  It's so weird to be in a place where everyone is dressed almost exactly the same way.  But don't let that fool you into thinking women aren't playing the fashion game.  They do, but it's only for other ladies to see at "ladies only" places.  And after visiting a ladies club of sorts I can see a few advantages.  Being in a place with just women is kind of nice, I've never had many female friends and I can see how more sisterly relationships can be formed.  Family is very important in the culture, which is mostly a good thing.  And people are the same as they are everywhere else, they're people.

Saudi Arabia is an American ally, so there are a lot of people trying to attack them, but they run anti-terrorist PSA's and have blockades and checkpoints where necessary and the violence has been lessened drastically.  They also run anti-domestic violence PSA's which was somewhat disheartening (but we do those too).

There is (like in many places) a drastic difference between the wealthy and the poor.  Workers being brought in from other countries were just laying around outside the airport waiting to be picked up and taken to the jobs they were promised.

Everything is crazy expensive.  Two smoothies and a coffee came to about $60!  Oh, but they do make excellent smoothies.  Alcohol is prohibited so they rock the juices!

And after 5 days of Riyadh it was off to Milan. 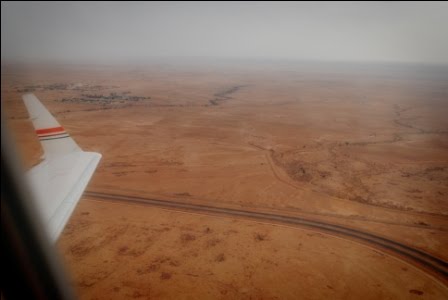 I shot this about 2 minutes after take-off.  Riyadh really is just a city and then desert.  I think that road goes to Jeddah, which is the city closest to Mecca. 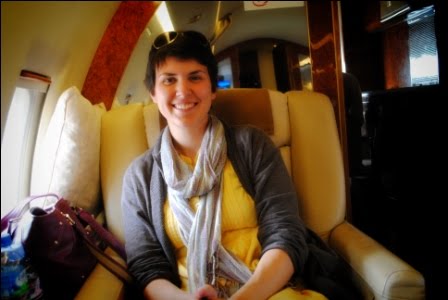 Flyin' in style.
Posted by leenie at 9:11 AM No comments: