Mabuhay! (That is the only tagalog I was able to pick up, and it's a very formal version of  'welcome'.)
Back in October I was sent to the Philippines to check out some furniture manufacturers (not a bad gig).  All I can say is that it was quite an experience.  It's the poorest country I've ever been to, and the traffic is unimaginable to me, even though I live in Los Angeles, but there is some lush, tropical beauty as well and the people are as nice as can be.
It started off with a 13 hour flight over there, oh and there was a typhoon happening while I was flying over, but it was fairly cleared up by the time I landed.  Needless to say, parents were calling and telling me to cancel my trip.  I left late Sunday night from LAX and arrived early Tuesday morning in Manila.  It was grey and rainy, but the worst of the storm had subsided, so I just crashed at my hotel room until I had to meet our buying agent later in the afternoon. 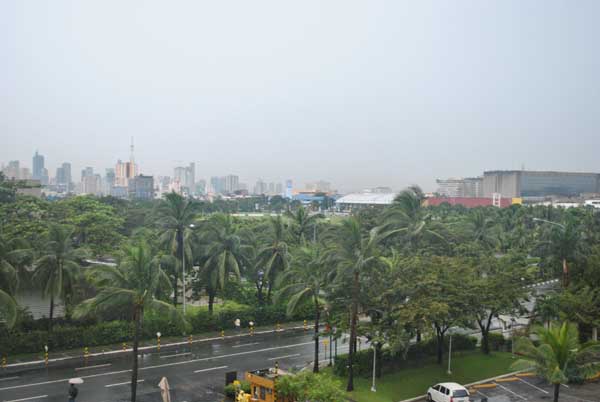 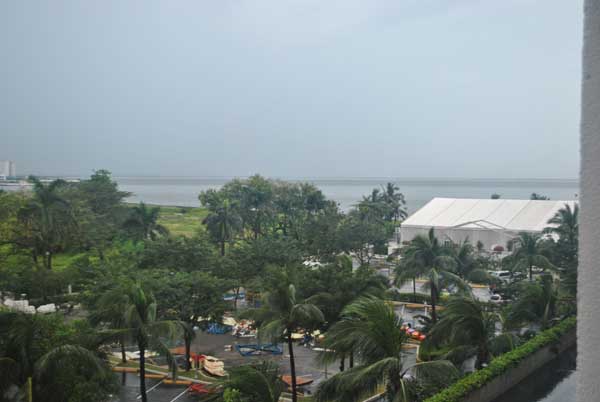 Views from my hotel room in Manila
Afterwards I went to the furniture show (Manila FAME show, meh) and met up with our buying agent so that we could go around and meet some of the manufacturers.
Then we headed to a showroom in Manila, it was in an old house and the courtyard was fantastic. 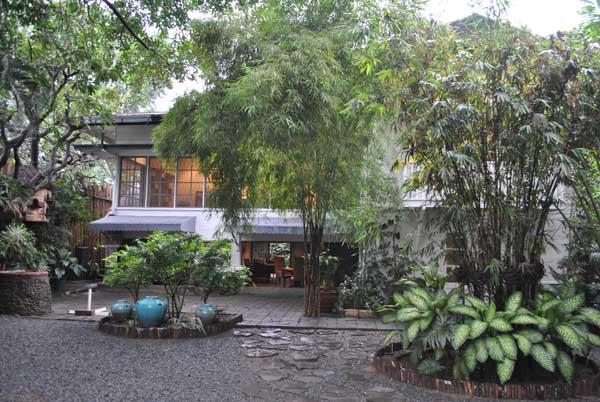 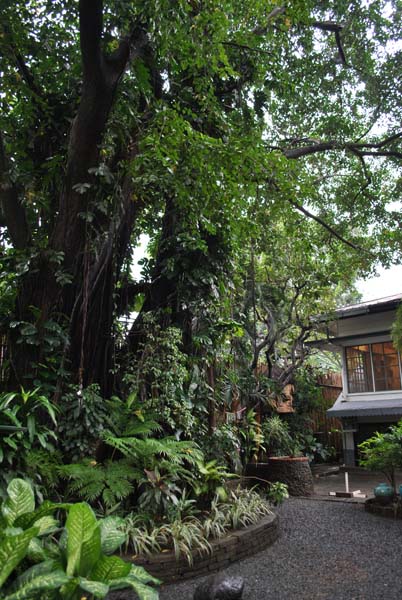 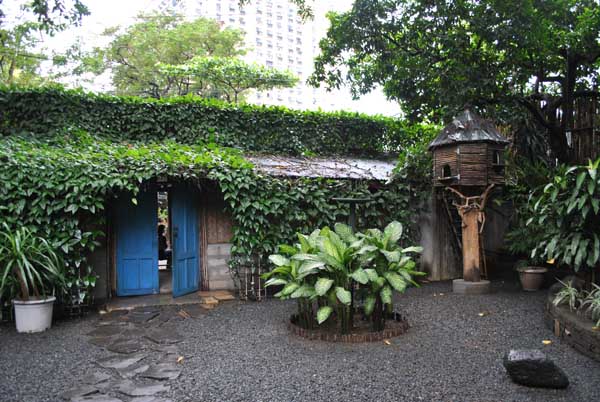 The lush greens and that blue door slay me, I was so in love.
The next day we headed north to some of the factories, and I got a full of idea of just how crazy traffic in Manila can be. 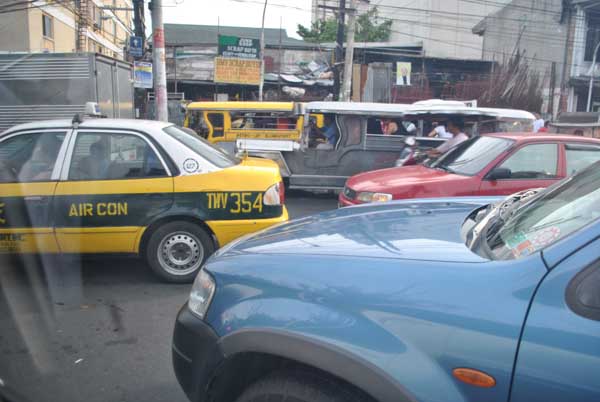 Lanes are completely an option 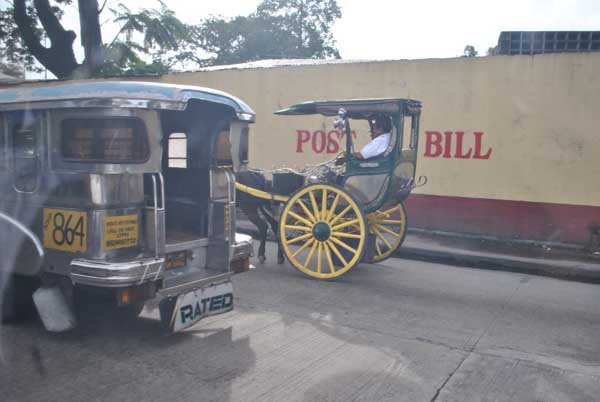 And there are so many modes of transportation: horse and carriage... 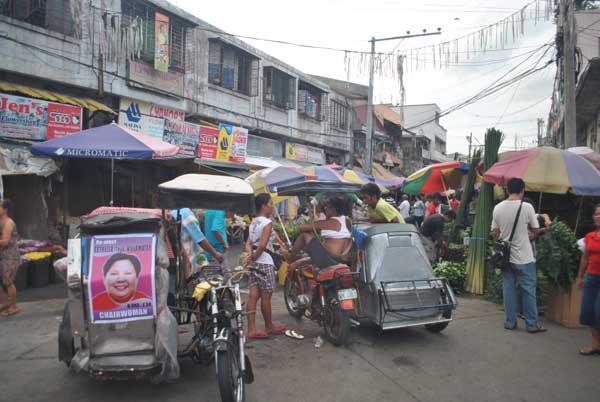 Trikes (motorcycles with a sidecar, up to 6 people can be on these, I swear I saw it)... 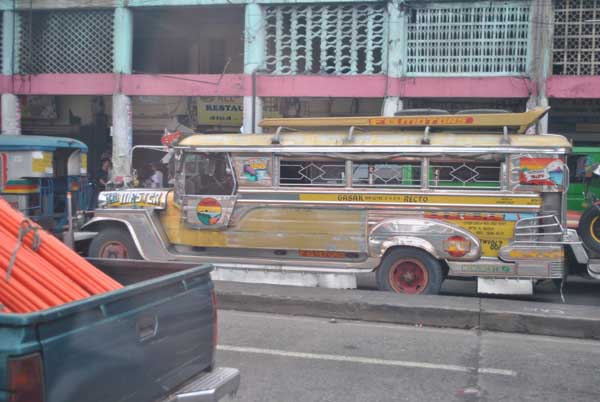 The jeepneys, are old American jeeps that are elongated and turned into a jitney, Philippines style... 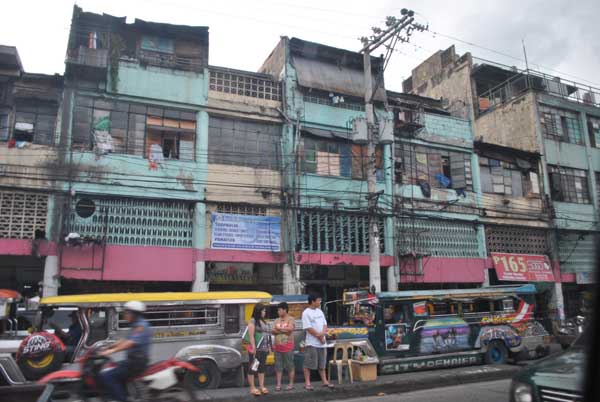 And, of course people just walking around amongst the cars, motorcycles, bikes, trikes, jeepneys, and... 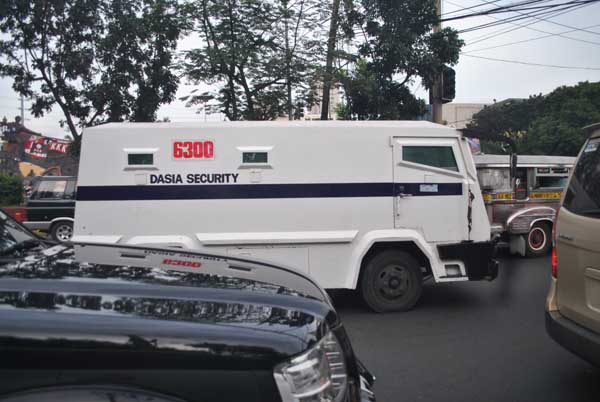 The funniest looking armored car I've ever seen.  This thing seriously looked like it was made in someone's backyard metal shop, but it gets the job done. 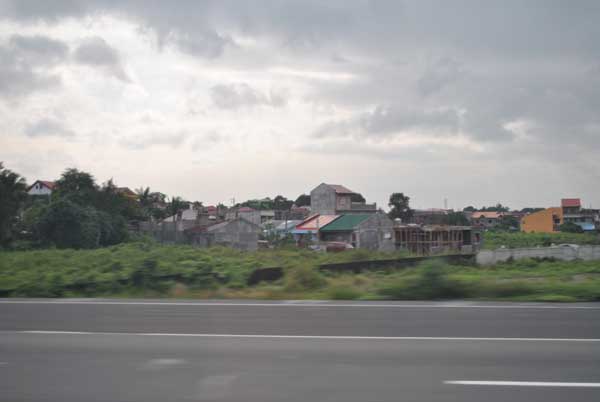 Then I saw some countryside on the way out to the factories, it was pretty and tropical, but slightly flooded from the typhoon in places.
One of the manufacturers took me out to dinner with another buyer (might have been where I got sick, but oh well) and I had the best drink in the world.  It was some sort of cucumber, celery, apple, parsley and a-bunch-of-other-green-things drink and it was amazing.  It wasn't thick like a smoothie, it was juice-like and I wish I could replicate it.
The next day we saw more of the furniture show in the morning and then I had a massage, body scrub and facial that evening at the hotel.  It was fantastic, and though not cheap because I was at a nice hotel, it was totally within my price range and I went for it.
Then I flew to Cebu (on a Cebu Pacifc flight, the ones who created this, but I sadly didn't get to see it), and I got to stay at a beach resort.  Stay tuned.
Posted by leenie at 9:50 PM

My mom is from the Philippines, and I went when I was 12. I was amazed at all the transport and remember crossing streets with my cousins hoping not to die. Sadly, the Philippines is a luxury compared to the poverty I witnessed in Bangladesh last year. I'm glad you made it there safely and sorry you got sick because the food in the Philippines is great.