The next day, we had lunch at Matt's in the Market with another Seattle friend.  I had never been to this place when I lived in Seattle, vague memories of renovations and a reopening seem to be there from right before I moved away.  But it was really great, the space was nice, with neat windows and the food was yummy.

After lunch we picked up a few more things from the market and headed back to Pauline's to start preparing for the dinner party.  As with almost every dinner party I throw, I didn't take pictures, but here's a shot of Ben and I enjoying the festivities. 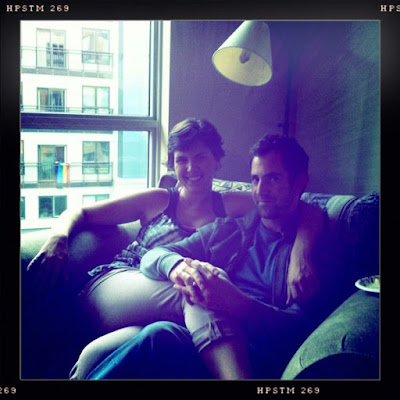 It was great to see most of the old gang and to get to hang out with Davey (a friend from architecture school who moved to Seattle after I left, what gives?).

The next day was pre-race day, so it was all about taking it easy.  I met up with my old co-workers for lunch and then Mom, Pauline and I roamed around the market for a bit before heading back to Pauline's for a nap.

Then we headed out to my all-time favorite Italian restaurant; Machiavelli's.  They were sadly out of bresaola (quite possibly the best cured meat on the planet), but the rest of the meal was fantastic.  I always love the conchiglie de la casa, but this time I tried the veal milanese, both are great.  There is always a wait at this tiny space, but it was worth it.  I can think of no better way to load up on race carbs. 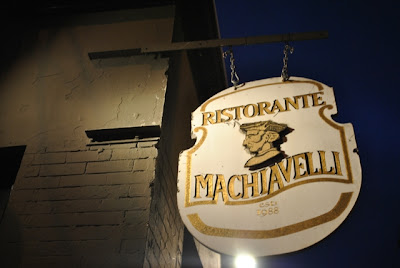 Then it was race day!  Pauline did the half marathon and I did the full.  We got to the start line an hour late, but the weather was pretty good and I was just happy my foot wasn't too messed up for me to run. 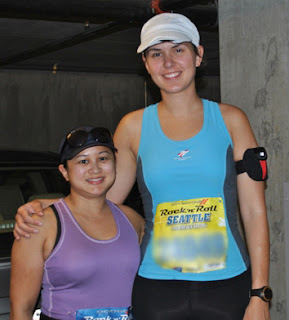 Please don't judge, it was so early.
Obviously, napping happened after this, but then it was time for a victory dinner at Kingfish Cafe.  This fancy-ish soul food place in Capitol Hill has got to be one of the best places to get a hearty meal.  Their cornbread, fried green tomatoes, hushpuppies and fried chicken are all standouts.  And their cakes are gigantic, 1 slice is easily enough for 4.  The owners and staff are awesome and the decor is laid back and rustic. 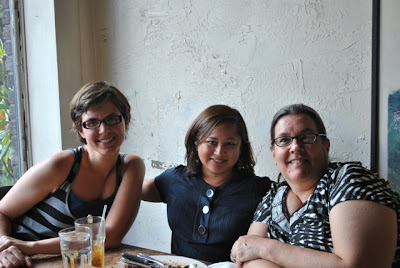 The next day we hobbled into breakfast at Salmon Bay Cafe in Ballard.  Fishermen eat here, I think that should tell you all you need to know.  Then we did some strolling around the Ballard market and a little bit of shopping on the main drag.  If I hadn't been so exhausted from the race the day before I would have found my way over to Cupcake Royale for some yummy cupcake time, but I wasn't myself, I apologize.

That evening took us to dinner at Claire and Ted's house.  As always Ted made a feast (bacon anyone?), and as with every dinner party (works for those I attend as well as host) I didn't take any pictures.

Which brings us to Monday, and time to go.  Ted and Davey met us for breakfast down near the market and then it was time to say our goodbyes.  Mom and I headed to the airport to take our separate flights and it was back to L.A. 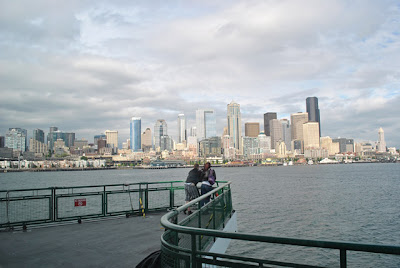